The first issue of the 2020 Journal of the Icelandic Forestry Association (Skógræktarritið) has been published and posted to its subscribers. The issue contains, as usual, a range of articles on diverse aspects of forestry, including path making with wooden slabs, bee cultivation, women and forestry in Vopnafjörður, a forestry field trip to S-Tyrol and memorial gardens, in addition to an article from the chairman of the Icelandic Forestry Association, in honour of the association’s 90 anniversary this year.

The cover picture is of a painting titled “Vigdís”, by Tryggvi Ólafsson, showing Vigdís Finnbogadóttir. Vigdís is an honorary member of the Icelandic Forestry Association and celebrated her 90th birthday on April 15. It was therefore fitting that a picture of her adorns the cover of this issue, considering the turning point of Vigdís’s election as the first elected female president in the world, but this issue marks a turning point in the history of the Journal, as it’s the first issue in the Journal’s history, dating back to 1933, where the majority of article authors are women. 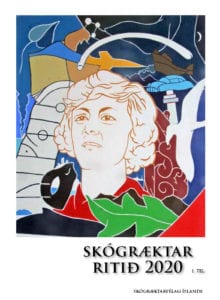