The first tree nursery at Akureyri was founded at the turn of the 20th century. The first supervisor of the nursery lived at Aðalstræti 52 and cultivated his garden there. A photo taken in 1912 shows a few larch trees in the garden, about 2 m in height. Nothing is known about their origins, but they are most likely Siberian larch, probably of a southerly cultivar because it usually doesn’t finish shedding its needles until November and buds about ten days earlier than most of the Siberian larch used in forestry in Iceland. The trees have suffered some frost damage early on and formed a large crown. The tallest trees in the garden were around 16 m at the time of the nomination, with the largest having a diameter of 190 cm at chest height.

Location of the trees on Google Maps: https://goo.gl/maps/W64sFVkJTSLE3jJ37

An article (in Icelandic) from Skógræktarritið – The Journal of the Icelandic Forestry Association about the trees (here). 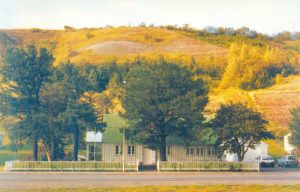