The Tree of the Year 2013 is a black cottonwood on the farm Freyshólar in Fljótsdalur and is the first cottonwood nominated. Black cottonwood is one of the most common tree species planted in Iceland – it grows quickly and is easy to produce. For this reason, it became one of the most common garden trees in the 1970’s. Due to how large it grows and its extensive root system its popularity as a garden tree has waned, but it has been planted extensively in forestry since the 1990’s, as it has one of the highest timber yield per hectare of the trees growing in Iceland. The tree at Freyshólar is most likely derived from material gathered on the Kenai peninsula in Alaska. It was planted in 1953 by twin brothers Baldur and Bragi Jónsson, who worked their entire careers for the Icelandic Forestry Service. Some manure was added to the soil when the tree was planted but received no further fertilizer after that. The tree has thrived nonetheless, as the soils at Freyshólar are deep and fertile. Measurements at the nomination ceremony put its height at 17,5 m with a trunk diameter of 50,5 cm at chest height.

An article (in Icelandic) in Skógræktarritið – The Journal of the Icelandic Forestry Association about the tree (here). 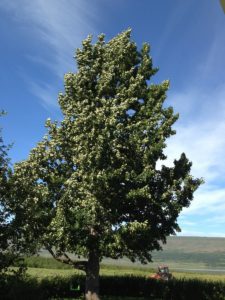