The Tree of the Year 2016 is a black cottonwood in the garden of Garðastræti 11a (a house known as Hákot) in Reykjavík. Cottonwood is very common in Reykjavík, having been extensively planted in the 1970’s – 1990’s. Its popularity stemmed from the fact that it was quick growing (becoming a “tree” fairly soon) and easily propagated. Like other trees in the city cottonwoods reduce winds and is a good air purifier. good tree for reducing wind in the city and.  The cottonwood tree at Hákot originally stood in the garden of Garðastræti 9 and was most likely planted sometime between 1952-1956. The old house at Garðastræti was moved in 1985 to make way for new building. The building work began in July 1986 with the clearing out of the vegetation in the garden. The owner of Garðastræti 11a, Ragnhildur Þorláksdóttir, pleaded with the contractors to spare the tree and give her time to contact the head of municipal gardens in Reykjavík. After a little back and forth the result was that the tree was moved to her garden, where she has taken care of it since. Measurements at the nomination ceremony showed the tree to be 17,5 m in height, with a trunk circumference of 180 cm at chest height. 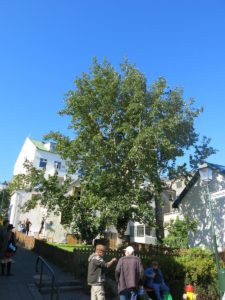