The Tree of the Year 2018 is a silky-leaved osier located at Ytri-Skógar in S-Iceland and is the first tree of this species to be nominated as Tree of the Year. The tree was most likely planted in 1948, by two brothers living at Ytri-Skógar. Osiers were quite common in gardens in Reykjavík in the early 20th century, but cultivation of it largely ceased later one, which means it is now a fairly uncommon species in Iceland. The osier at Ytri-Skógar has an especially large crown, but measurements at the nomination ceremony put the crown area at over 200 square meters, with a height of 11,1 m and a trunk circumference of 2,4 m at 60 cm height. 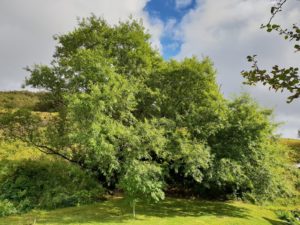