The larch is in the Skrúður garden, that has a notable history as one of the first ornamental gardens in the country. The date of planting is not known exactly but based on notes regarding the garden it was most likely planted between 1908 and 1910, derived from seed sown in Akureyri between 1900 and 1905. Growing conditions at that time were quite difficult, especially during winter storms. The fact that the larch tree survived can be put down to the care of Sigtryggur Guðlaugsson, the founder of the garden, who took great care to shelter the trees during winter. At some point in the trees early years some goats also escaped into the garden and ate the top of the tree. A lower branch emerged as a new top, leading to a noticeable twist in the trunk of the tree. The tree has been regularly measured. In 1966 its height was measured at 8 m, in 1985 it had reached 9,55 m height and in 1995 10,55 m, with a circumference of 2 m at 1 m height.

Location of the tree on Google Maps: https://goo.gl/maps/oDCLZy8zNqxEiQiLA 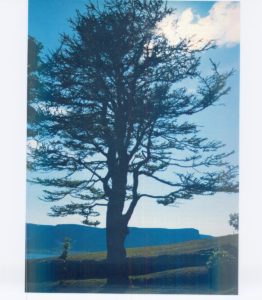