The wych elm standing in front of the house at Túngata 6 is one of the treasures of Reykjavík. Its expansive crown has grown without constraints from nearby buildings or other trees. Its trunk splits into two at about 1 m height. A measurement in 1948 put its height at 7,15 m, in 1965 its 9 m and is then the tallest elm in the city, but in 1999 it measured at 10,7 m and had lost its first place standing in height to a nearby elm. Its circumference at the split at 1 m height was 2,45 m in 1999. Its age is disputed, with claims made both for it being planted sometime between 1890-1895 and in 1902. Information from descendants of previous owners of the house at Túngata 6 indicates that the tree was probably planted sometime after 1908, with assistance from Agner F. Kofoed-Hansen, the first head of forestry in Iceland, who lived nearby. The tree would have come from a tree nursery run by Einar Helgason, but many of the oldest trees in Reykjavík came from there.

Location of the tree on Google Maps: https://goo.gl/maps/v9m4QXR3KFgj6Tmi7 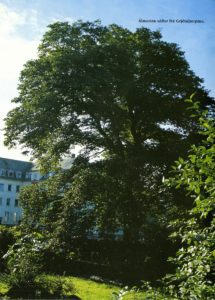